The Cat by Edeet Ravel 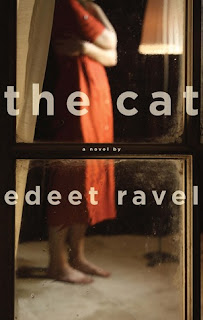 I received a copy of this book as part of the goodreads first reads giveaways.

I was not sure what to expect from this book, it sounded interesting, and a little different from something that I would typically read, and I am glad that I won and had the chance to experience this novel. There is no other way to explain it, you don't read this, it is something that you experience along with the main character Elise, the events, the emotions, it is like reading someones diary, and it is fantastic.  I feel a little odd saying that as this is not a happy story, and these are not good emotions that she is going through, but there is no way not to enjoy this novel, the author brings you right there with Elise and you can't help but feel what she is feeling, and want to somehow help, even though you know it is not real.

Elise lives with her son alone, he is her world, and they are together most of the time as she has the bonus of being able to work from home. They are best friends, and very rarely disagree on anything. I don't remember her in the entire book mentioning her sons name, but she did talk about him, and from what she said, he seemed like an old soul, a very insightful young man, very grown-up for his age. One day tragedy strikes, and he is hit by a car and killed, that happens at the beginning of the novel, and the rest is of Elise trying to cope with her feelings, and life without him.  I cannot begin to imagine how I would feel or deal with the loss of a child, but the way Elise remembers, and her behaviour etc seems very realistic to me.

The name of the novel comes from the fact that Elise and her son adopted a cat, and after the tragedy that takes place, she wants to make a big decision, however, everything that she wants to do, she can't because of the cat, and she is convinced that she cannot leave Pursie alone as her son will not forgive her. You get to see how she handles this along the way with everything else that she is going through.

I looked up the 7 stages of grief, and by thinking back on the novel, you can see her going through most of these different stages for sure 1) shock and denial 2) pain and guilt 3) anger and bargaining 4) depression, reflection, loneliness. The parts that I didn't really see are 5) the upward turn 6) reconstruction and working through 7) acceptance and hope.  There was maybe little moments, but they did not last long, and even at the end of the novel, I just thought that it was not very realistic as to what her emotions had been all along, and it almost felt like a rushed ending that wanted to be a happy one, but it lost the mark for me on that aspect.

So overall, I would have to give this book a 4/5, it was very close to being a 5/5, however, the ending disappointed me, I was looking for something different, I don't want to say what as it would be a spoiler.

Posted by BookwormInBarrie at 11:11 pm