Life Of The Party by Christine Anderson 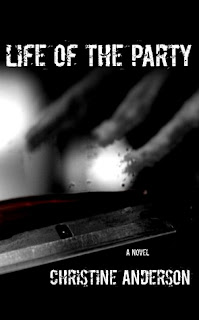 First off, all I can think of to say is this book takes you for a ride! It started at a medium pace, and then it picked up, and didn't really stop right until the end.

It is filled with a lot of mature content as far as drug use, so just as a caution for someone younger reading this blog post, or if it is something that you are not interested in reading about, you may want to pass this one by.

This book follows a girl named Mackenzie, and it starts with her close to her last year of high school, and follows her and her friends that live in a small town.  Mac (Mackenzie) is not the most social of characters, and really sticks to the small group of friends that she has, until one night that they go to a club and she meets the singer of the band that is playing Grey.

From that point on, she starts on a journey that will bring her to a place that some may describe as hell on earth. You can tell from the beginning of the book that she does have the addictive personality, and she is really not afraid of trying any new kind of drug, which is not a good thing.

At the beginning of the book her friends and Mac are involved with things like weed, mushrooms, and some of the basic kinds of drugs, which in some social circles is considered normal. Then the night she meets Grey, her best friend Riley has a really bad trip on mushrooms, and has hallucinations, and feels as though he is going to die, and she has to sit with him all night and try to assure him that it is all going to turn out ok. From that point on Riley has decided that he is not going to be doing anymore drugs, and also decides to quit smoking as he sees what it is doing to him. It puts a significant strain on their relationship as he will no longer go to the places that he would before as he knew what was going to be taking place, and knew that if he went he would cave and start doing drugs again.

From that moment forward Mac puts herself in to situations where all different kinds of drugs are available, and it is not just the basics anymore. The author has found a way to show how easy it can really be for someone to follow down that road, and is able to portray a level of denial that a true addict will have that everything is ok, they have it managed, and they can quit whenever they want. I don't really want to give anymore of the story away as I truly believe that it is something that you must read and experience for yourself. This is quite a heavy topic, but I think that anyone who is interested in reading about different real life situations would truly appreciate it.  For sure a 5/5 for me!

Posted by BookwormInBarrie at 8:01 pm