The Magic of Finkleton by K.C. Hilton 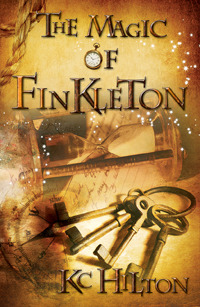 I was very generously given a copy of this book by K.C. Hilton, and I cannot thank her enough! I highly recommend this for anyone to be honest, I don't think that you have to be a child to enjoy this story.

This story revolves around a family that inherits their Uncle's store (like a general store) and have to move to a town called Finkleton. When they arrive there, the children (Jack, Lizzy and Robert) start to realise that there is something a little off about this town, and they connect it back to the store, and as they start to uncover the clues one after the other, they do put it all together and are amazed at what they figure out.

The writing in this book is wonderful, it is set in England and although it does not specifically say, I believe it to be maybe in the late 40's or early 50's just based on the behaviour and the conversations that the characters have with each other. I love the little things that the author put in there to keep to that area and time period, for example instead of using the word "glasses" (as in reading glasses) she uses "spectacles", things like that won me over through the whole book over and over again.

I also really enjoyed the way that the siblings interacted with each other as they did not get along 100% of the time, which let's be honest is reality, especially in the younger years. I would have to say that my favourite character was Robert the youngest child, I really liked his personality and the way that he was very independent and wanted to figure everything out on his own.

So to wrap up and stop all of my gushing, I highly recommend this series to anyone, and am really looking forward to the other 2 books in the series. A 5/5 for me for sure! Thank you again K.C. I feel honoured to have received your package.

Posted by BookwormInBarrie at 1:33 am