Changing His Game by Justine Elvira 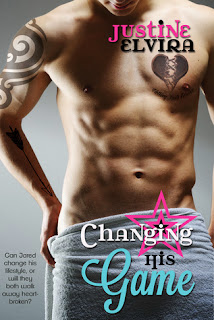 Goodreads: https://www.goodreads.com/book/show/18480475-changing-his-game
Source: An ARC was provided by the author in exchange for an honest review

*Warning: This book is for mature readers ages 18 and up. It contains sex, sex, and more sex with a porn star. It briefly touches on M/F/M and M/F/F.Adult Films. XXX Movies. Porn.These are the kind of movies I've never planned to watch. It was a taboo topic where I grew up. As a kid I had only heard of it in passing. In middle school my parents would talk about my creepy uncle Frank and how he should look for a job instead of watching "those movies" all day. In High School boys thought it was funny to ask my friends and me to star in the amateur adult films they were making. In college most of my guy friends watched them, but I never had. When I moved to California that changed.After surprising my fiancé at home and catching him screwing another woman, I hopped in my car and started driving. I was running away from my old life and I needed a change. I remembered my friend Tawny inviting me to visit her in Los Angeles, so that's where I went.I didn’t find Tawny when I got there, but I did find her gorgeous roommate, Jared. Our friendship started out rough, but he gave me a place to stay and helped me get back on my feet. He became my best friend. My best friend who millions of women happened to lust over.Jared plays by a different set of rules, where anything goes. His lifestyle is unlike anything I’ve ever witnessed before and it scares me. When you live your life on the edge, eventually you'll fall over. I didn't want to see that happen to him.At night he’s just Jared, my Jared, and I’ll deny it to anyone who asks, but I’m completely in love with him. During the day he’s Brandon Boner, and the world is in love with him.Oh yeah, did I mention he’s a porn star?

This book was an awesome read, really quick with great characters!

It starts off with Autumn traveling to California because she had just walked in on her boyfriend having sex with someone else when she decided to pay him a surprise visit. She decided that she is going to go to California to spend time with her friend Tawny who moved out there to become an actress.

She gets there and gets yet another shock when Tawny is not there when she arrives, however, she does meet Jared, whose house Tawny was living in, and immediately she feels an attraction to him.

My favourite character has to be Jared, he is hot! I can see why she would be attracted to him, and he is very well rounded as well. His gut reaction when he meets her the morning after she arrived at his house was to kick her out, however, he soon comes to change his decision and allows her to stay and give her the time to get on her feet.

Their relationship builds from friendship to more, and it is really sweet to watch. They both grow a lot during the book, and they learn to compromise with each other on certain things.

Posted by BookwormInBarrie at 2:58 pm