How To Be A Good Wife by Emma Chapman 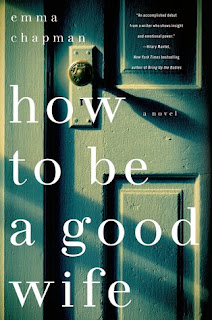 In the tradition of Emma Donoghue's Room and S.J. Watson’s Before I  Go to Sleep, a  haunting literary debut about a woman who begins having visions that make her question everything she knowsMarta and Hector have been married for a long time. Through the good and bad; through raising a son and sending him off to life after university. So long, in fact, that Marta finds it difficult to remember her life before Hector. He has always taken care of her, and she has always done everything she can to be a good wife—as advised by a dog-eared manual given to her by Hector’s aloof mother on their wedding day.But now, something is changing. Small things seem off. A flash of movement in the corner of her eye, elapsed moments that she can’t recall. Visions of a blonde girl in the darkness that only Marta can see. Perhaps she is starting to remember—or perhaps her mind is playing tricks on her. As Marta’s visions persist and her reality grows more disjointed, it’s unclear if the danger lies in the world around her, or in Marta herself. The girl is growing more real every day, and she wants something.

There was definitely something about this book that kept me reading, even though I wasn't sure what it was at first. The writing was brilliant, and so vividly done I cannot believe that this is her debut novel and I cannot wait to read what she puts out next, I just know it is going to be great. If you have not read this book yet, I highly suggest that you do.

We meet Marta right away and there is something about her right from the very beginning that you almost find haunting, like she is in a fog. At the surface she is a typical housewife going about her daily routine, but we soon come to find out that she is anything but typical. She has secrets that even she does not know that she has. We also meet her husband Hector shortly after the novel begins (he is a teacher), and I could tell that there was also something off about him almost from the beginning as everything seemed too "normal" between the two of them.

I loved the way that the story was built and the pacing was just right. Marta starts to see visions of a young blonde girl, and it is more than halfway through the novel before we find out what the significance of that is, and it kept me reading at a fast pace to get to that moment, it was perfectly done. There was so much in the first half of the novel that kept you wondering what it all meant, and I promise they will all be answered and more, and it is so worth it!

We also meet her son Kylan, and he has recently in the last few months moved away from home, and she misses him terribly. The first time that he brings his girlfriend home to meet his parents didn't go anywhere near as well as he hoped it would, and that is all thanks to Marta and her visions that she is having and her wanting him to come home and live there so that she can still take care of him as she did when he was a little boy. I think that this is something every Mother can understand to an extent, however, Marta takes it to the extreme.

The name of the novel comes from the book that she was given as a wedding present from her new Mother-In-Law on the day of her wedding, and some of the suggestions in there just seem so archaic! It is something that I could see women reading in the 40's or 50's for sure, but it just does not apply in today's society, however, Marta still remembers some of the suggestions in there, and still follows them on a daily basis.

If you are looking for a haunting, chilling read that will leave you thinking about it for days after this one is for you! This one gets a 4/5 from me!
Posted by BookwormInBarrie at 10:28 am