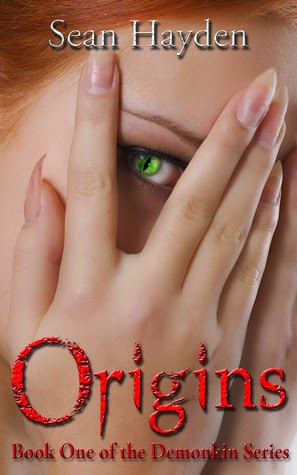 Being different is never easy, especially when you're a vampire.Ashlyn is far from normal. She was born a vampire, a trait that makes her utterly unique. Knowing this, her family strived to keep her existence a secret. Tragedy forces her from hiding and hunger drives her into the open. Unfortunately, living in a world that has accepted, embraced, and yet still fears the supernatural is never a good place to stand out. Especially when the one who notices you wants you dead. The only people who can save her want to use her as well, but she's left with little choice. Ashlyn joins the FBI and becomes torn between two worlds. She can either be a monster, or she can help destroy them.

Ashlyn is kick ASS! Let me just start by saying that!

We start the story off when Ashlyn's Mother is calling forth a spirit, or so she believes, and it does not go well for her, we find out at the end of the novel why.

We then turn to Ashlyn when she is about 17 years old, and living with her Aunt. She has been living with her Aunt since birth as her Mother did not make it through childbirth. She has no ID to speak of, and she does not exist anywhere, she has been living in the house with her Aunt, and no one knew. Her Aunt passes away in a traffic accident (and this is all in the first chapter, so I am giving nothing away). This is when the story picks up as far as action, etc and does not stop!

Ashlyn figures out that her Aunt has left her some fake ID to use, and a key to her safe deposit box, so she goes to the bank and gets in and her Aunt has left her $10,000.00 to start off a new life for herself somewhere, she knows that Ashlyn could not be left the house or anything as she does not technically exist anywhere, so this is the best that she could do.

Ashlyn has been surviving by drinking her Aunt's blood her entire life, so now she is confused on where she is supposed to find a supply as unlike "typical" vampires, she has no use for humans as their blood does not appeal to her, only blood of some kind of supernatural she is beginning to realize appeals to her, so on top of everything else, she is trying to figure out what her Aunt was as she came off as a typical human to her her entire life.

After setting herself up in a hotel, she decides to travel out to where she knows of some clubs to see what she can come across. A situation occurs and she is brought to the owner of the club to see what is going to be done with her, and she starts to realize what some of her powers are. She is then brought to the vampire that really runs Chicago to see what he thinks can be done with her as far as keeping her alive or not. There is another big situation that happens there, and that is when she meets the agents of the FBI for the first time.

She is taken in to custody and questioned extensively as far as who she is, who her maker is (as every vampire is made, not born), and she answers all the questions honestly and tells her life story as best that she can. They decide that she is unlike anything that they have seen before, and decide to offer her a job.

We get to see Ashlyn go through training and get put on her first case, and see how that goes, but I don't want to give anything else away as it would totally take away from the awesome that is this book! If you love paranormal and are in for reading about a creature that is unlike anything you have read about before, this book is for you! I give this a 5/5 and I cannot wait to get my hands on book #2 in the series!
Posted by BookwormInBarrie at 10:51 pm