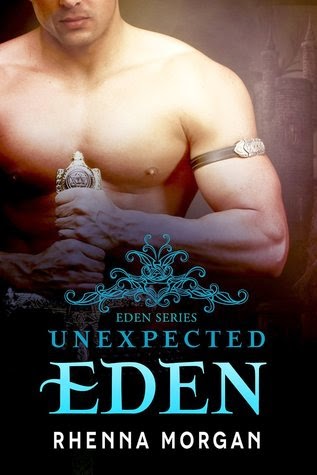 Paradise, love, power…and a prophecy with a price. Most people believe Eden no longer exists. Lexi Merrill’s about to learn they’re wrong. A hard-working bartender with a self-sufficient backbone and a wary nature, she knows pickup lines like a second language. So, when Eryx Shantos barges into her world with too-smooth words and a body to back it up, she locks up her libido and vows to keep her distance. Eryx has other ideas. As king of the Myren race, Eryx is duty-bound to enforce the laws preventing exposure of their existence to humans. Yet The Fates have led him through his dreams to Lexi, a temptation he doesn’t want to resist. The question--is she Myren, or human, which makes her forbidden fruit?When Eryx’s nemesis tags Lexi as his next target, Eryx insists on taking her home where he can keep her safe. Lexi had no idea “home” would mean the one-and-only land of creation…or that she’d trigger a prophecy that could doom her newfound race.

Let me just start off by saying that I LOVE the world that Rhenna has created in this novel!

We start off the novel with Lexi at work as a bartender, and little does she know that her entire world is going to be flipped on its side in the next 24 hours. We first meet Eryx when he goes in to Lexi's work and pays off the other bartender on duty so that she will serve him, it does not turn out the way he wanted, so he waits for her after work and persuades her to have breakfast with him, everything takes off from there and does not stop right up until the last page of the novel.

No one believes that Eden exists anymore, however, Lexi is about to learn that it still does, and she has more of a connection to it then she could possibly imagine. The only person that she seems to have a connection to in the real world is Ian, a retired police officer that now does private investigations, we learn more about her history as the story goes on, however, there is still so much that is not explained and I am eager to know, and I like that Rhenna did not give everything away in the first installment, it gives us readers something to look forward to.

Eryx may just be one of my favourite book boyfriends! He is handsome, strong, and romantic. He also happens to be the King of the Myren, something he fails to tell Lexi when he brings her to Eden. He also has a twin brother and a sister whom Lexi meets within her first day of being there, and everyone accepts her as family right away as Eryx has been dreaming about finding her for years, and everyone feels like they know her already.

I want to live in Eden, I want to have what Lexi has, Rhenna has created a fantastic world and I cannot wait to read the next installment! Nothing is confusing about getting to know the world with her world building, and the names that she gives everything like in some other novels. I marvel at Rhenna's imagination, and how she thought up all the names she gives everything.

I absolutely give this novel a 5/5 and if you are looking for a great paranormal romance, this one is for you! I have already messaged Rhenna and begged about when the next installment is coming out lol!
Posted by BookwormInBarrie at 12:32 am