The Empty Glass by J.I. Baker 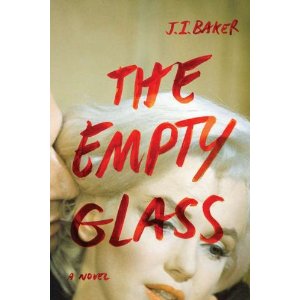 "In the early-morning hours of August 5, 1962, Los Angeles County deputy coroner Ben Fitzgerald arrives at the home of the world's most famous movie star, now dead, lying naked in her bedroom still clutching a telephone.  There he discovers The Book of Secrets- Marilyn's diary-revealing a doomed love affair with a man she refers to only as "The General." In the following days, Ben unravels a wide-ranging cover-up in the aftermath of the star's "suicide" and some heartbreaking truths about the fragile, luminous woman behind the celebrity. Soon the sinister and surreal accounts in The Book of Secrets bleed in to Ben's own life, and he finds himself, like Monroe, trapped in a deepening conspiracy. The Empty Glass is an unforgettable combination of the real-life facts and legendary theories that have dogged Monroe, the Kennedys, the Mafia, and even the CIA for decades-and an exciting debut from a remarkable new thriller writer to watch."


I have to say it did take me a little bit to get in to this book and to understand how the narrator is telling the story, but once I did, it was a great read! I loved how he was able to tie in really simple things as evidence that it was not a suicide, things that I would have never thought twice about.

There is one main character Ben Fitzgerald, and I didn't really connect with him at all, I was able to follow the story the way that he as telling it etc, but nothing about his personality really drew me in to him at all, I was not able to make that connection on the human level.  The second sort of main character is Jo who is a reporter of sorts, I also found it very difficult to her and to understand where her motivation for finding the truth was coming from.

In the end I only gave this book a 3 out of 5 stars as there was a lot of disconnect from the characters, however, the actual story and all of the controversy surrounding Marilyn Monroe's death is very interesting to read about! I would highly recommend this book to anyone who has an interest in Marilyn, or anyone who enjoys conspiracy theory for sure.  Also there is a lot of events in this book that happen to him because he is trying to seek out the truth behind her death, and that made the book a little exciting as well as you did not know where it was going to go next in that aspect.
Posted by BookwormInBarrie at 9:04 pm