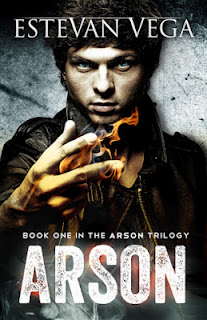 Arson is based on a teenage boy named Arson who has this power to make fire with his hands, and he is unsure of where it came from, or how to control it.  It goes through a bit on his past history in regards to what has happened to his parents, and gives you insight on who he lives with now, and what that is like for him. In my take on the book it is not until a girl named Emery moves in next door that he begins to think that possibly he has found someone that could be his friend (or possible boyfriend).  Although Emery does come with her own set of issues, they seem to be comfortable with each other right from the start (which is not the greatest first impression that Arson could make lol).  There is an event that happens towards the end of the novel that builds the reader up to an ending that will definitely leave you wanting to read on and see where the story goes!

I love how Estevan built up to the world that surrounds Arson, and all of the characters in it, I found myself simultaneously despising and feeling sorry for more than one of them at the same time which is brilliant!  I truly believe that this is how the first novel that is part of a trilogy is supposed to be written, it is a perfect build up for everything that could happen in the second novel, and I cannot remember when I have ever read a lead in novel like this before!  Absolutely a 5 out of 5 in my opinion!!!!  If you have not picked up this one yet, what are you waiting for??

Posted by BookwormInBarrie at 11:20 pm