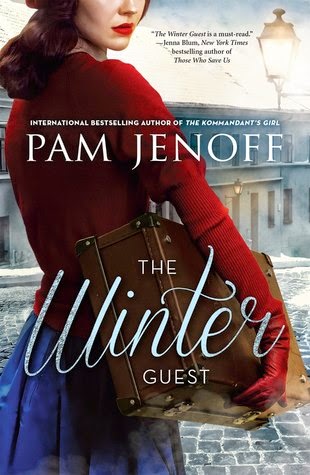 Publisher: Harlequin Mira
Published: August 26 2014
Goodreads: https://www.goodreads.com/book/show/18168527-the-winter-guest
Source: An ARC was provided by the publisher in exchange for an honest review

A stirring novel of first love in a time of war and the unbearable choices that could tear sisters apart, from the celebrated author of The Kommandant's Girl Life is a constant struggle for the eighteen-year-old Nowak twins as they raise their three younger siblings in rural Poland under the shadow of the Nazi occupation. The constant threat of arrest has made everyone in their village a spy, and turned neighbor against neighbor. Though rugged, independent Helena and pretty, gentle Ruth couldn't be more different, they are staunch allies in protecting their family from the threats the war brings closer to their doorstep with each passing day. Then Helena discovers an American paratrooper stranded outside their small mountain village, wounded, but alive. Risking the safety of herself and her family, she hides Sam—a Jew—but Helena's concern for the American grows into something much deeper. Defying the perils that render a future together all but impossible, Sam and Helena make plans for the family to flee. But Helena is forced to contend with the jealousy her choices have sparked in Ruth, culminating in a singular act of betrayal that endangers them all—and setting in motion a chain of events that will reverberate across continents and decades.

I devoured this book in one day, it is that good. I am so glad that I was chosen to review this book for the publisher.

I loved the pacing, it was done so well, nothing seemed rushed or out of place. And I could imagine myself being there with the characters and going through everything that they were, which was not all happy.

The characters were awesome, there was not one that I didn't like or feel as though I could relate to. We first meet Helena, and she is the one twin that did everything with her Father, like bringing in the wood and hunting for food. Then we meet Ruth (the other twin), and she took after the Mother and did all the cooking and chores mostly.

They have two younger sisters and a younger brother that they are now responsible for as their Father has passed away, and their Mother is in the hospital because of cancer. They make sue on the rations that they are given from the Government. They also make due with what they have around the house for things like clothes and supplies, which is not much.

Helena is going to the city to visit her Mother at the hospital one day, and on her way back through the forest she comes across a soldier who is badly wounded. She decides to take it upon herself to hide him and be the one to take care of him, so she hides him in an old abandoned chapel in the forest. In these times, this could mean arrest or even death for someone helping out a foreign soldier, so she is putting herself and her family at great risk for Sam.

This starts off a set of events that even Helena could not have imagined I don't think. There were strict rules when it came to portions that you were allotted per person and Helena had been going to the market to buy more supplies after Ruth had for Sam, and this was against the law, it was called hoarding, and for example the police showed up at the house and made allegations towards Ruth about hoarding, and threatened her. Helena had no idea that this would happen.

This is just the tip of the iceberg on what happens in this novel, and I don't want to say much more about specific events for fear of giving something away, however, this novel will have you gripped from the very first chapter right down to the last page.

I absolutely give this book a 5/5 and if you love stories about war, family, and first loves, you will not be disappointed!

Posted by BookwormInBarrie at 1:22 pm