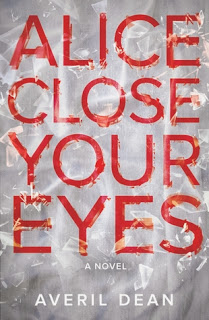 Goodreads: https://www.goodreads.com/book/show/18006132-alice-close-your-eyes
Source: ARC provided by publisher in exchange for an honest review

With haunting prose and deft psychological insight, Averil Dean spins a chilling story that explores the dark corners of obsession–love, pain and revenge.Ten years ago, someone ruined Alice Croft's life. Now she has a chance to right that wrong–and she thinks she's found the perfect man to carry out her plan. After watching him for weeks, she breaks into Jack Calabrese's house to collect the evidence that will confirm her hopes. When Jack comes home unexpectedly, Alice hides in the closet, fearing for her life. But upon finding her, Jack is strangely calm, solicitous . . . and intrigued.That night is the start of a dark and intense attraction, and soon Alice finds herself drawn into a labyrinth of terrifying surrender to a man who is more dangerous than she could have ever imagined. As their relationship spirals toward a breaking point, Alice begins to see just how deep Jack's secrets run–and how deadly they could be.

The summary of this book does not do it justice, there is so much more involved than stated there, it had me hooked from start to finish, I received it in the mail today, and finished it in one sitting, that is how gripping it was for me!

I will admit I did feel a bit of a disconnect from Alice, and that is why this is not a 5/5 book for me, some of her decisions I did not agree with, even knowing that she had a very tough upbringing and it is a situation that I cannot relate to at all, she just seemed very naive sometimes. Also Jack was very all over the map for me, he was so nice and loving one moment, and in a split second that would change.

I really enjoyed the writing, I was fully engulfed in their world and what was happening, and had to know how it ended right away. The pacing was also really well done, and I did not feel lost at all when Alice was going back to her childhood and remembering what she perceived  to have happened back then. It was good to know a little bit as to where she was coming from, but still all of her actions did not add up to me.

I really enjoyed the characters of her Mother and Nan as well. I could relate to how her Mother had acted at times, and it was all pieced together for me towards the end of the book when it was all coming together. There were so many things that Alice was not made aware of that her Mother was going through that I think maybe she would have understood her a little better had she known, but her Nan and her Mother decided to keep those from her, and I guess I understand why, she was still very little.

If you are looking for a thriller with some romance (if you can call it that, it is more a disfunctional relationship), then this book is for you. From the very beginning Alice and Jack's relationship starts off rocky, and truly I don't think that it ever recovered, they were both bringing in baggage to the situation that neither wanted to talk about or deal with, and I think that it doomed it right from the very beginning.

Overall this book gets a 4/5 from me, it had action, romance, thriller aspects, and plot twists that I did not see coming! I highly suggest you look for it coming out in January and put it on your to be read list.
Posted by BookwormInBarrie at 11:49 pm