Anton and Cecil: Cats at Sea by Lisa Martin and Valerie Martin 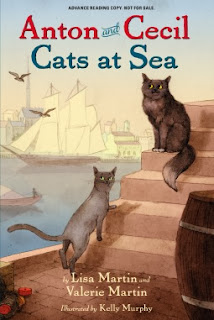 A swashbuckling story of two very different cat brothers and their adventures at sea.Cat brothers Cecil and Anton are as different as port and starboard. Cecil, stocky and black with white patches, thirsts for seafaring adventure as he roams the docks of his harborside home, taking day trips on fishing boats when the chance comes along. Slim, gray Anton prefers listening to the sailors’ shanties at the town saloon, venturing to port only for the day’s catch. But one day when Anton goes in search of fresh mackerel, he’s stolen off the dock, and the next thing he knows, he’s at sea.Knowing little of the wide open ocean that lies beyond the harbor, Cecil boards another ship in hopes of finding Anton. But what begins as a rescue mission turns into a pair of high seas adventures, with thrills and danger bubbling under every wave.Anton takes on a fierce rat, outwits hungry birds, and forges a forbidden friendship, while Cecil encounters dolphins and whales and finds himself in the middle of a pirate raid. On an ocean as vast as the one Anton and Cecil have discovered, will they see home—or each other—ever again?Orange Prize−winning author Valerie Martin’s and Lisa Martin’s colorful cast of characters, rich historical detail, and lyrical storytelling will delight fans of such classic animal adventures as The Wind in the Willows, Stuart Little, and Poppy.

I had such fun reading this book! It is a perfect middle grade read for either boys or girls, it has something in it for both of them, and even their parents if they are reading it aloud with them, I think people of all ages can get something out of this story.

Anton and Cecil are brothers, and could not be any different in personality, however, I think that it reflects well on family dynamics. They still live with their Mother Sonya at a lighthouse in Nova Scotia, and travel to the docks everyday to search for food and entertainment. The way that the author's were able to portray the sailors and how they acted, and how that attracted the cats was such fun.

The cats were also able to speak to other animals as well, and that was an interesting twist in the story, and it was great how you got to see the different personalities in the different animals, and you could imagine that that is how they would be speaking if they could, it was great!

I enjoyed the pacing of the book, it was just spot on, and very easy for a middle grader to follow for sure and not be lost anywhere. I also liked that you got to see how the brothers interacted together, and when they were separated we got to see a real growth in both of them, and I think that there are some good lessons for kids to learn in this book. I would for sure recommend it for anyone looking for a good middle grade read, this one gets a 4/5 from me!

Posted by BookwormInBarrie at 7:05 pm