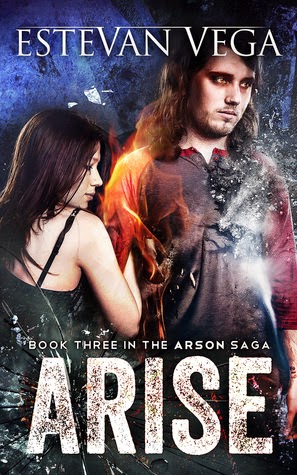 THE PIECES ARE SCATTERED. A NEW NIGHTMARE DAWNS. THE END IS COMING. With the aid of Kyro, a smart-mouthed street hustler, and Redd, a cunning investigator at war with her conscience, Joel and Aimee Phoenix follow a lead to Salvation Asylum, where they hope to find their daughter alive. But Emery and Adam have already fled from captivity into even more chaos and confusion. Danger haunts every action and darkness seeks to claim her protector’s life as a result of using too much of his power too soon. Adam’s soul now hangs between life and death, yet Emery can’t help dwelling on the boy who once tempted fire and her love. From inside his coma, Arson roams the fiery halls of past nightmares, looking for the code of escape. But when a stranger slides into his subconscious, promising new abilities and a way out, part of him is ready to accept the revelation and be free, and part of him questions the ghost’s true intentions. Divided and fearful, Arson’s mind is now a deadly game of wills. There’s no telling what will become of the outside world. Arson’s only choice is to enlist every power within and arise from the ashes of who he used to be. THE WAR HAS BEGUN. IT'S TIME TO WAKE UP AND FIGHT.

It takes off right from where the second book ended, and it did not stop with the action the whole time. I have loved this entire series so far, and I cannot wait to see if there is going to be a fourth book in the series, which I am crossing my fingers that there will be.

*If you have not read the first two in the series, I would stop reading here*

Arise takes off from where Ashes ended, and we are met again with Emery and Adam to start with, and where they are now. Adam is unconscious and Emery is having to fend for them by herself. She is met by a stranger on the road whom takes them in, and believes everything that Emery tells her about the Asylum and everything that happened there, and to her surprise, Ruth believes her.

We are then met with Arson and that is just another whole bag of fun, whenever the story lands on him, it always takes off and does not stop. He is in the asylum and unconscious as well, and him and Adam are meeting up in his dreams, it is fantastic what the mind can do, and I love that Estevan played on that, and took it to levels that I didn't think would be possible.

I cannot rave about this series enough, if you have not started it yet, what are you waiting for? Adventure, action, love, and family, everything you want in a series! The writing is brilliant and every time I am done with one of the books I get a little sad that there is not more for me to read, so a definite reread of the entire series is in order!

I would love to see this series turned in to a movie, however, we would have to wait for the final book to come out first, because it cannot be left like this one was! I refuse to believe that that is the end lol! I asked Estevan if there was going to be another one, and I got a maybe, so I am sitting here crossing my fingers that his maybe's mean yes lol!

So if you could not tell, I give this book a 5/5, and I am begging you, if you have not picked this series up, do so as soon as possible, you will not be disappointed!!!!

Posted by BookwormInBarrie at 7:38 pm