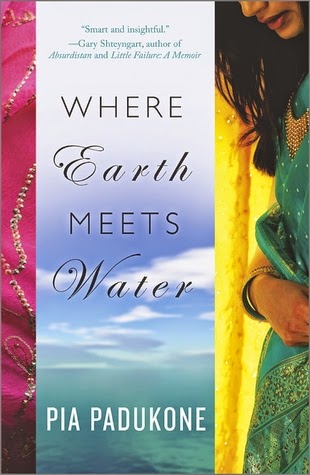 Published: April 14 2014
Goodreads: https://www.goodreads.com/book/show/18371642-where-earth-meets-water
Source: An ARC was provided by the publisher in exchange for an honest review

In this poignant and breathtaking debut, one man searches for meaning in the wake of incomparable tragedy…Karom Seth should have been in the Twin Towers on the morning of 9/11, and on the Indian shores in 2004, when the tsunami swept his entire family into the ocean. Whether it's a curse or a blessing, Karom can't be sure, but his absence from these disasters has left him with crushing guilt—and a belief that fate has singled him out for invincibility. Karom's affliction consumes everyone around him, from his best friend, Lloyd, to his girlfriend, Gita, who hopes that a trip to India will help him find peace. It is in Delhi that he meets Gita's grandmother, Kamini—a quirky but wise woman with secrets of her own. At first Karom dismisses Kamini, but little does he realize that she will ultimately lead him to the clarity he's been looking for. Spanning the globe from New York to India, Where Earth Meets Water is a stunning portrait of a quest for human understanding, and a wise exploration of grief, survival and love in all its forms.

We follow the lives of several people in this novel, however, they are all connected to Karom in some way. He is in his thirties and is dating Gita and they seem to be at a point in their relationship where she is not sure where they are going to go from here because of the demons in Karom's past.

Karom suffers from night terrors, which he seems to be oblivious to when they are happening, and Gita is trying to get him to work through them, however, he is too set in his ways to seek any kind of professional help. We learn through this story what has happened in his past to make him this way, and it is a very tragic story.

I cannot imagine what Karom has gone through in his lifetime, it seems as though death follows him everywhere, and I can see why that would make him the way that he is for sure. He is standoffish with people, including Gita. He does develop through the story in a way that I find very realistic, he is not cured all at once, and has to find his own way.

I thoroughly enjoyed this story and cannot wait to see what else this author will produce.

The setting is between America and India, and I think that the author did a beautiful job at describing both settings, I felt like I was right there with them.

The characters were really gripping, my favourite being Kamini. She is Gita's Grandmother, and is a sweet sweet soul. she is a published author and we do get to read one of her stories as the book goes on, and it was really good, very telling of her life.

I give this book a 4/5, the only reason it does not get a 5/5 is because there are some loose ends that I wish had been tied up at the end.

Posted by BookwormInBarrie at 9:18 am