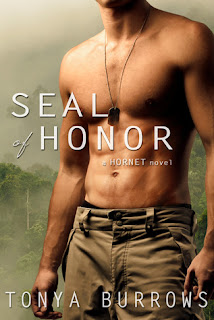 
Seal of honor is about a guy named Gabe who finds himself ripped suddenly from the only job he ever had, and the only type of life he ever lived, being a Navy Seal Officer. Now he is left to figure out what he is going to do with his life and what kind of job he wants to have, and when an offer to go in to the private sector as a member of a hostage recovery group comes to him, he is not sure that is what he wants to do, but with some pressure from friends and family, he decides to take the offer, and there is already a job waiting for them.

We are then introduced to the remaining part of the team, which includes his best friend. They are then flown down to Columbia where a wealthy American businessman is being held captive. It is then that we are introduced to the possible love interest for Gabe in a interesting way. For some reason I just was unable to connect with the characters in this book, I am not sure if it was the writing, or the story line, I think maybe I was expecting something a little different.

One thing that I know I would have appreciated is there were a couple of times in the book where there were navy acronyms used, and I had no idea what they meant, it would have been nice to know what they were even if they were not pertinent to the story really. Overall I think that this was just not a book for me, it was not a bad book, but I didn't find myself truly engaged either, so this gets a 3/5 from me.

Posted by BookwormInBarrie at 3:00 am