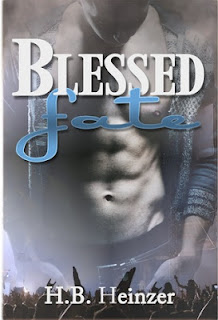 Colton Bradford never believed in love at first sight. And then, Rain Maxwell walked through his buddy's front door. He knew there was something special underneath the shy, guarded exterior and was determined to find out what it was. The problem? Rain had devised her own set of life rules and “Never get involved with a band mate” was right near the top of that list. She allowed Colton into her heart as one of her closest friends, but pushed him away at the mention of anything more. When tragedy strikes Rain's personal life, Colton is determined to be there for her in whatever way she'll allow. Will she finally open up to him and consider taking things to the next level? Will Colton's ways of trying to bury his feelings for Rain in the past ruin the possibility of a future for them?

I wasn't sure what to expect of Blessed Fate as it is only my second time reading a book that is set during the exact same time as the first one, but told from a different characters point of view, but let me tell you I was not disappointed! I liked Colton most times during the first book, but there was a couple times that I just wanted to give him a good punch in the arm and tell him to smarten up lol, but reading this has opened my eyes to what he was thinking during those times, and it made me understand him a whole lot more.

Blessed Fate is about the lives of Colton and Raine, members of the group Blessed Tragedy, who are best friends. At the beginning of the book we learn that Raine's mother has been diagnosed with cancer, and Colton helps her try and deal with this, he wants her to go home and spend some time with her and the family, however, after emailing back and forth with her dad, she decides that it does not sound that urgent, so she chooses to stay out on tour as her dad said that this was her mother's wish.

Colton has had feelings for Raine for years, and he has asked her out to dinner before, but she turned him down as she has a "no dating band members" rule. When everything comes up with her mother, they seem to grow even closer, and he takes his chances again, but again he is denied as she is dealing with too much at the moment to think about anything like that.

As it turns out, they decide to go for it and become a couple. This does not sit well with some people and the author really knows how to write the jealous girl part, she drove me crazy. I understand that Colton had chose in the past to have a physical relationship with her, but he had never lead her to believe that it was anything more, and he knew that it was a mistake on his end. This is a part of the story that we see follow through the remainder of the book, and it adds some twists that were really fun to read.

I think one of my favourite aspects of this book was seeing everything so differently from Colton's point of view, with both Blessed Tragedy and Blessed Fate, we see the same story line, but it almost plays out like two completely separate story lines as there is such a difference as far as how each character views a situation, and how they react to it. I also really liked the romance with Colton and Raine throughout, it is not perfect, and each of them screw up at some point, and have their issues, but in reality who doesn't right? I liked it because it was so real, there was no insta-love happily-ever-after, this was definitely something that they had to work at, and grow with each other, and learn how to fit that other person in their lives as both of them have been single for so long that it is a drastic change to have someone there all of a sudden.

I cannot say enough how much I have enjoyed reading about these characters, and all the other ones in the books as well. The band members are awesome, and I have grown to understand and like Raine's family as well. If you are someone who likes new adult, this is definitely a series that you need to check out, it has drama, comedy, family issues, and romance all wrapped up in to one! Oh, and don't forget about the aspect the awesome band on the way to being rock stars. I would give this one a 5/5, check it out if you have not already!

Posted by BookwormInBarrie at 1:16 am