Reclaim My Heart by Donna Fasano 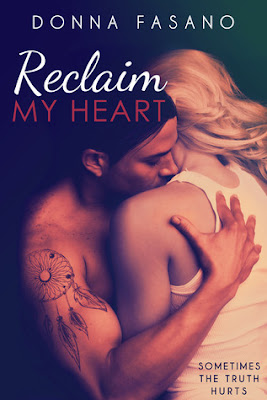 Sixteen years ago, Tyne Whitlock cut all ties to her past and left town under the shameful shadow of a teenage pregnancy. Now her fifteen-year-old son is in trouble with the law and she is desperate for help. But reaching out to high-powered attorney Lucas Silver Hawk will tear open the heart-wrenching past in ways Tyne never imagined. Forced to return to the Delaware Indian community where Lucas was raised, Tyne and Lucas are tempted by the heated passion that consumed them as teens. Tyne rediscovers all the reasons she found this man irresistible, but there are scandalous secrets waiting to be revealed, disgraceful choices made in the past that cannot be denied. Love is a powerful force that could heal them both—if the truth doesn't rip them apart.

I really enjoyed this novel, it had a very strong message about family, and how much it means to have them in your life, and how the decisions that you make do not only affect you, they affect everyone around you as well. We see this right at the beginning of the novel when we find out that Tyne left her hometown when she was pregnant as a teenager, and did not even choose to tell the father about it, but when it comes down to it, he is the one that she needs help from the most.

I really liked the characters in this book, Tyne I could see some of my Mom in, she was also a single Mother, and did whatever she had to (working long hours and evenings if need be) to make sure that there was enough to go around. I also think that the author did a great job of portraying her son as a teen that is confused about things in life, and acting out to get attention, who didn't do that as a teen? Not many people I know.

When we see the story progress and Lucas takes them back to his hometown we see a very strong Indian influence, especially when we meet Uncle Jasper, he is one of the elders in town, and pretty much raised Lucas after he lost his father when he was young.  I think I enjoyed this a lot as it really brings a lot to the story as far as character development.

The romance in this book was also really realistic, as there is a history with Tyne and Lucas, and all cannot be forgiven easily, they need to work at it, and see if it is something that they can get through and bring them together again. At the same time that they are doing this, they are also trying to dual parent at the same time which is difficult for Tyne as she has been making all of the decisions till now, but she understands now that Lucas is there, she needs to take his opinion in to consideration. Overall I would give this book a 4/5 and would really suggest picking it up if you like contemporary romance.

Posted by BookwormInBarrie at 1:27 am