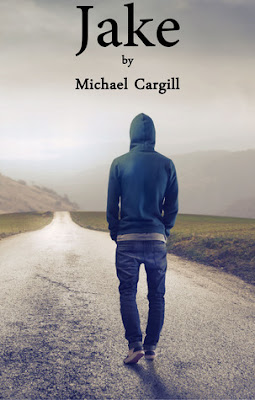 Jealousy, lust, and teenage insecurities are the lifeblood of any large school.Loneliness can strike without warning, spreading through the cramped corridors like an epidemic.Out on the playground, rivalries are formed from the pettiest of incidents.Some people look at Jake in awe, others look at him with hatred.Jake is just an ordinary boy who wants to be liked.Jake wants to know why the girls never seem to notice him.Jake is... well, he's Jake.

I think that this is the first time that I am so unsettled by a book that I don't know what to say, and that is not a good thing. The first hundred or so pages could have been told in less than 30, it was just way too repetitive, and I was 1 chapter away from making it a did-not-finish book. In all those pages we were introduced to Jake, his family, and friends at school. It was all about his regular everyday activity, his train rides to school, his activity at school, his train ride home, and what he does when he gets home, it was just too much for me and I really found it hard to keep going.

Then we get to the second part of the book, and I have to warm you that if you have lost someone close to you, or are someone who suffers with depression, this is not a book that I would recommend at all!

Now I did enjoy Jake's interaction with his younger brother Ben, he is an adorable child, and I found myself laughing out loud at him as I have nephews, and I could picture them doing the same things he did, and it is very funny. I can imagine that it is not very easy to write from the perspective of a 2(ish) year old, and Michael did an excellent job with it.

We did not know for most of the book how old Jake really was, and for the majority of it, I really thought that he was younger, like somewhere between 8-11 just by the wording that the author used, and he seemed so very naive in certain circumstances, that I could not imagine him being any older than that, so when we finally did learn that he was 15, I was kindive shocked to be honest.

The other part of the book that I enjoyed was Jake's relationship with Kim, first loves, and first relationships are always so exciting, the holding hands for the first time and being so nervous if you are doing it right, or going too fast for the other person, all of it was very well written. The way that they would bicker back and forth playfully was really good as well, it shows a comfort in a relationship that is sometimes hard to find.

I am not sure how I feel about Jake's parents, there are a couple things that really bugged me, but then overall, they seemed very open with their children, able to crack jokes and know that Jake and Ben will not take it to heart. Also they are genuinely happy for Jake when he brings Kim home to meet them, a little in shock at first as Jake had told them nothing about her previously, but still happy for him.

Posted by BookwormInBarrie at 5:08 am