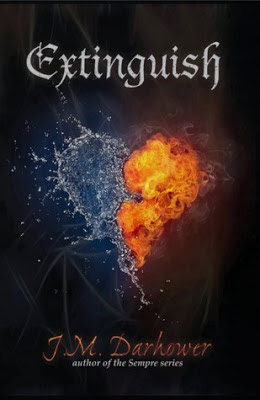 SYNOPSIS
(This is listed as young adult, however, due to mature content I would have to disagree and put it in the New Adult or even Adult category)

One… Two… Three… Four…
I Declare War
Serah always believed the world around her was perfect. As a Power, one of the warrior angels, she has spent her existence defending the innocent from evil. After tragedy strikes, tearing Serah's brother from her life, she's given the task of stopping the approaching apocalypse before it's too late.
Only one thing, though: she has to venture to Hell to do it.
Lucifer—or Luce, as he prefers to be called—has been biding his time in Hell, longing for revenge against those who oh-so-easily cast him into the pit. When the heavenly beauty shows up at his gate, he's just as captivated by her presence as she becomes of him. The attraction between them is palpable, and Serah's willpower slowly slips. How can this charming creature, this scarred Archangel, be the one annihilating the world she so loves?
As the war wages on, the world entwined in chaos, Serah starts questioning everything she ever knew. When the light and dark, hot and cold, finally collide, she has to make a choice—a choice that sets her world on fire, black and white exploding into colorful flames.
Serah has questions. She wants answers.
Luce just wants to play a game.

This was a totally new kind of book for me as it is a take on angels and demons, and not just any angel and demon, the main character Serah is in a relationship with Archangel Michael, and suddenly receives a new assignment where she has to negotiate with his brother a fallen Angel known as Lucifer (or Satan as he is not fond of being called).

One of my favourite things about this book is how heaven and hell area described. What Serah expects to see when she gets to the gates of hell to negotiate with Lucifer is nothing like what is there to greet her. I don't think that she was expecting him to look the way he did either, I think we all picture him as this monster with a long tail and horns or something.

During the novel we get to see all of the characters grow from what they have believed for so long. Even though this book is about angels and demons and heaven and hell, it is not a religious book (at least to me it was not), for me it was more about how we portray things in the world, and how we are (mostly) so quick to judge without knowing the full situation, or the person at all.

Also a lot of this book had me thinking about how people behave, and why they behave that way, and one of my favourite quotes from this book pretty much sums it up for me, it is from Serah "I've spent my entire existence watching over children, trying to keep the evil from tainting them. I look at the kids and see their inherent goodness, their innocence, and their compassion. They are born that way. They only change, only turn their backs on the world, when the world turns their back on them."

This was a shorter book, but it had me thinking more than any book has in a long time, if you are looking for a book that will leave you pondering for a long time to come, and possibly second guess things that you have always thought about or felt a certain way about before, this is the book for you. I give it 5/5.

Posted by BookwormInBarrie at 5:09 am