Gwynneth Ever After by Linda Poitevin 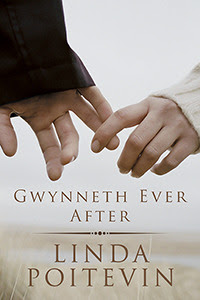 Published: June 30 2013 by Michem Publishing
Pages: 222
Goodreads: http://www.goodreads.com/book/show/17874990-gwynneth-ever-after
Source: I was provided an eARC in exchange for an honest review
Where to buy:
Amazon http://www.amazon.com/Gwynneth-Ever-After-ebook/dp/B00DHGBKJO/ref=sr_1_1?ie=UTF8&qid=1372609325&sr=8-1&keywords=gwynneth+ever+after
Barnes & Noble http://www.barnesandnoble.com/w/gwynneth-ever-after-linda-poitevin/1115760913?ean=2940016798677
Kobo http://www.kobobooks.com/ebook/Gwynneth-Ever-After/book-tGFN5lm0zUKaYLrPZXOpcA/page1.html?s=x4C4qmXjxE2-4qdHqALjXg&r=1

Gwyn Jacobs doesn’t believe in fairy tales. Ever since her ex-husband walked out, leaving her alone with three small children, Gwyn has been mother, father, and bread-winner all rolled into one. Her own scarred heart aside, she refuses to open up her children’s lives to the possibility of another heartbreak, and so she has an unbending policy of no dating and no unattached men in their lives.Until her very own fairy tale falls into her lap...and the hero won’t take no for an answer.

Gwynneth Ever After was an enjoyable read for me, the characters were well written, and it was a very good romance between Gareth and Gwynneth (with two n's), and her kids were very cute as well. Gwyn has been raising her 3 kids alone ever since their father walked out on them, and she has been doing a good job so far. When she meets Gareth she cannot believe that he is beside her in the theatre, and she is so clumsy she keeps dropping all her pencils, and hitting him with her bag, it is quite funny.

Gareth just happens to be a major hollywood actor, so when he asks her out for coffee after the show is over, she is taken back a little, but agrees to go with him. It is a little uncomfortable for her when they are there as the other patrons are staring at them because of who Gareth is, but he doesn't seem to notice.

Gwyn's kids seem to take to Gareth right away which scares Gwyn as she is worried that they will get attached to him and then he will just leave again. During the course of the book we see Gwyn and Gareth grow together and try to decide if a relationship between the two of them would work. We also find out the real reason that Gareth is in Ottawa to begin with, and he has some secrets of his own that he has not divulged yet, will it tear them apart? Overall I would give this book a 3/5, if you are looking for a good romance story with the added adorableness of kids, this is for you!
Posted by BookwormInBarrie at 1:04 pm